Make every beat count with Fitbit’s Charge 2. Including PurePulse® heart rate, multi-sport modes, guided breathing sessions and stylish interchangeable bands. The interactive OLD display makes it easy to get your stats- just tap the screen. With a battery life of up to 5 days you can track day and night without needing a charge.

Connect Charge 2 with the GPS on your phone to see real-time stats like pace and distance on display and record a map of your route. Get a better understanding of your fitness level and see how you can improve over time with a personalised Cardio Fitness Score. SmartTrack™ Automatically recognises select activities and records them in the exercise section of the Fitbit app.

Get friendly Reminders to Move that encourage you to reach an hourly goal of 250 steps. See call, text and calendar alerts on display when your phone is nearby. Sync stats wirelessly & automatically to computers and 200+ leading iOS, Android and Windows devices.

You can sync all your fitbit data with Apple Health via an app called myfitness sync. It works beautifully so even more awesome for iphone/ipad users.

It has made a huge difference to the way I live my life. I am moving more and am feeling healthier already. The app is really easy to use and the setup process was seamless. You can use it straight from the box as it comes partially charged. I like competing with friends who also have Fitbits – it was easy to find such friends via the app.

I am an active person, love the gym, hiking and running as well as long walks. I’ve never thought I needed a fitness tracker before but I’ve been thinking about getting one for a while so I was excited to test out Fitbit Charge 2. I’m really enjoying it, tracking my workouts is strangely satisfying and I love the reminders about hourly steps. I work mostly front of my computer and sometimes it is easy to forget about moving a little – this is where I really appreciate my Fitbit a lot. I’m also not sure if I should admit it in public but I feel happy when it celebrates reaching my goals with me! 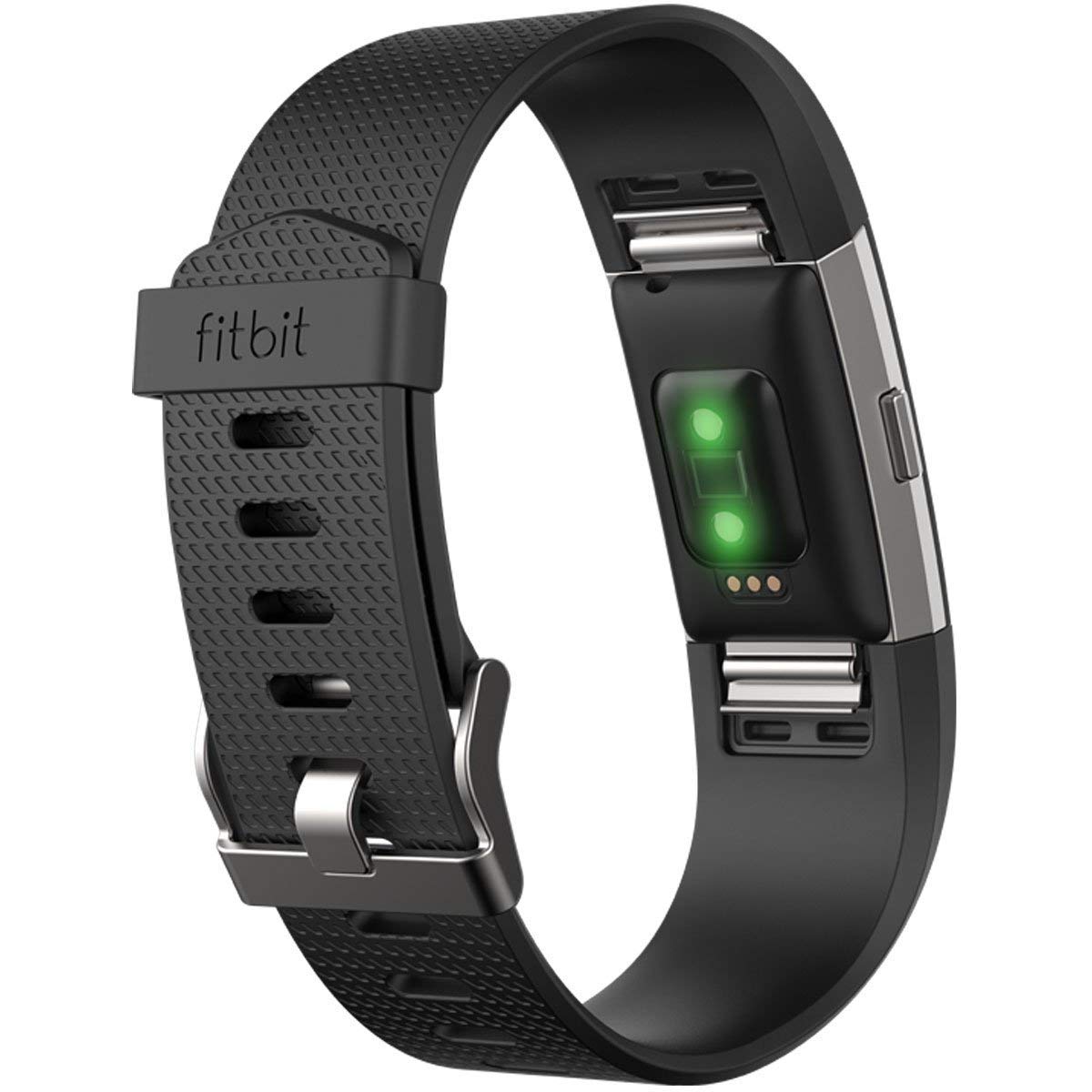 It’s also really great for women with narrow wrists; some other fitness trackers are just too big and bulky for me.

But this one is nice and can be customized to a more elegant look with a replacement band. It is easy to use, but it does not come with instructions. The instructions are online and can be found in the first welcoming email sent after you register the device and download the application on your mobile. The screen is a little difficult to read without glasses for those who need them. It takes a little time to learn how to use it properly and utilize all of its features. But once this is done, everything becomes very easy.

Generally the Fitbit Charge 2 is a great way to monitor your exercise output. The apps allow you to chart your progress in graphical representation which is an excellent way of helping you to monitor, set and achieve goals. The sleep monitoring is a nice touch to see if you are resting your body as much as you should.

This is a great entry level activity tracker and will have a definite positive impact on keeping track of your general fitness.

Fitbit says that its original Charge and Charge HR were its best-selling fitness tracker. So it’s not surprising Fitbit has taken everything that proved popular on the original and used this as a basis for the Charge 2. Packed with everything you could want, except GPS, the Charge 2 covers all of the basics. You can consider this device more of an evolution than a reinvention, but by correcting many of the shortcomings of the original, the Charge 2 proves to be a great all-rounder.

The Fitbit Charge 2 isn’t a massive advance on the Fitbit Charge HR. The design has improved a bit, and the larger display is useful for running through your stats as well as for checking phone notifications, but those are things the Fitbit Blaze already offers, yet for a higher price. But if you’re looking for a fitness tracker to monitor your heart rate throughout the day, and want multi-sport tracking features, then you’ll want to consider the Fitbit Charge 2.

If you’re after a running watch you won’t want the Fitbit Charge 2. But if you’re after something to track your daily step count, and a bit of exercise every few days, this is one of the best choices money can buy. The additional fitness features bring this Fitbit closer to being the best option for those who want to be able to wear the same tracker day in day out. There’s not all that much reason to update from the Fitbit Charge HR, but as a first Fitbit tracker, or a replacement for a less-substantial model, the Fitbit Charge 2 is well worth a look.

There’s a much larger screen here than on the Charge HR – but the device is a fair bit thicker too, so you may not be a fan if you liked the compactness of the last version.

Having said that, the screen is still relatively small and it’s not colour, but it is an OLED display. The new selection of watch faces and the larger vertical display mean I can see time, steps and heart rate all at once – plus it’s a touchscreen, which is a first for the Charge range. However, I found the touchscreen to be a little unresponsive, you just need to give it an extra tap sometimes.

There’s a button on the left-hand side of the tracker that you use to skip through the menu options, such as steps, time, heart rate and calories; you can hold this button down to activate certain features as well. Its screen is not always on, but a lift-to-look gesture works okay. You can tap the display, or you can press the side button. The button on the left side of the device is much more pronounced.

On-board features include a stopwatch, exercise tracking mode, heart rate. There’s also a new Guided Breathing feature “Relax”, which will monitor your heart rate for 30 seconds and then set you a breathing challenge to help you improve your condition.

This is the first time Fitbit has offered this kind of feature, and I found that it would indeed calm down heart rate when I wanted it to. It’s interesting to see Fitbit focus on a feature that’s not entirely exercise-focused, and it’s a welcome addition.

The Fitbit Charge 2 tracker itself is rather small, and comes with one two-section strap in the box. Each part of the strap can be detached by pulling it out of clips on either side of the tracker, if you want to swap-in a different one for a style change. The choices are as follows: plastic strap in light blue, dark blue, black or purple. The two more premium options for the fashion-conscious among you are lavender/rose gold and black/gunmetal.

The Charge 2 isn’t waterproof like the Fitbit Flex 2, but it is water-resistant, meaning it can handle a few splashes while you do the washing up. You won’t be able to wear the Charge 2 in the shower or when swimming, though. It’s nice to be able to wear a fitness tracker in the rain without worrying about it being damaged.

In terms of tracking tech, the FitBit Charge 2 is similar to other fitness trackers. If you wear the Fitbit Charge 2 in bed it’ll monitor your sleeping patterns. Like other Fitbit products, this feature is a little more temperamental. However, I was slightly disappointed, as silent alarm and sleep tracking isn’t a smart alarm that can wake you up at a more optimal time.

The Charge 2 only gives you a time asleep, which is the time you spent awake and restless, subtracted from your overall tracked sleeping time. It means that while you might have slept for eight hours, the time asleep reading might only read 4hrs 23mins. It’s worth keeping this in mind before assuming that the device isn’t tracking your sleep correctly. I think this is actually a better, and less misleading, measurement than the overall sleeping time that other trackers offer. It can show you why you’re still waking up feeling tired come morning.

Really it’s the quality of sleep alongside duration that’s important for appropriate recovery and well-being.

A key improvement over the original Charge is that the Charge 2 offers multi-sport tracking – you can track outdoor running, treadmill running, walking and weight training, as well as bike, elliptical trainer and interval workouts. The Fitbit Charge 2 will track your exercise automatically, so you don’t have to start sessions manually. It means you don’t always need to remember to press buttons when you’re exercising – although if you’re embarking on a specific workout I’d recommend setting up the tracker to ensure you’re getting the exact readings you want.

Bear in mind that this isn’t the best device for running. There’s no GPS tracking, so if you want a dedicated running device I’d recommend the Fitbit Surge. The Fitbit Charge 2 will at least work with your phone’s GPS to track the distance travelled – a feature both the original Charge and the Charge HR lack. It does mean you need to take your phone out for a run with you though.

New with the Charge 2 is a VO2 max approximation to provide what Fitbit is calling your Cardio Fitness level.

This is the maximum amount of oxygen your body uses during intense exercise. And is another good indicator of your overall cardiovascular health. Fitbit calculates this by comparing your personal data against your running speed. Whilst using connected GPS and your heart rate measurements. Your score is provided against other people from your gender and age.

Battery life is rated at around five days, which is about right. A major improvement over the old Fitbit Charge is the new clamp-style USB charging cable. This locks around the tracker on both sides and makes orientating it much easier, ensuring it stays connected. The old Charge had a connector that plugged in directly and therefore could easily become dislodged. You’ll also get a notification and an e-mail. To let you know the Charge 2 is running low on battery, which is useful.

You can buy the Fitbit Charge 2 here. We’re super excited to be able to offer you the chance to win a Fitbit Charge 2 Heart Rate and Fitness Tracking Wristband for yourself. Just enter via the rafflecopter below. Good luck!

3 Quick Tips for Investing in Cryptocurrency

How To Tell if You Have a Fear of Intimacy