You know it’s going to be a good day when chocolate arrives through the post, right? Today, I’m super excited to be featuring Morse Toad and their personalised gifts, letterbox gifts and pun gifts on Vivre Le Rêve. 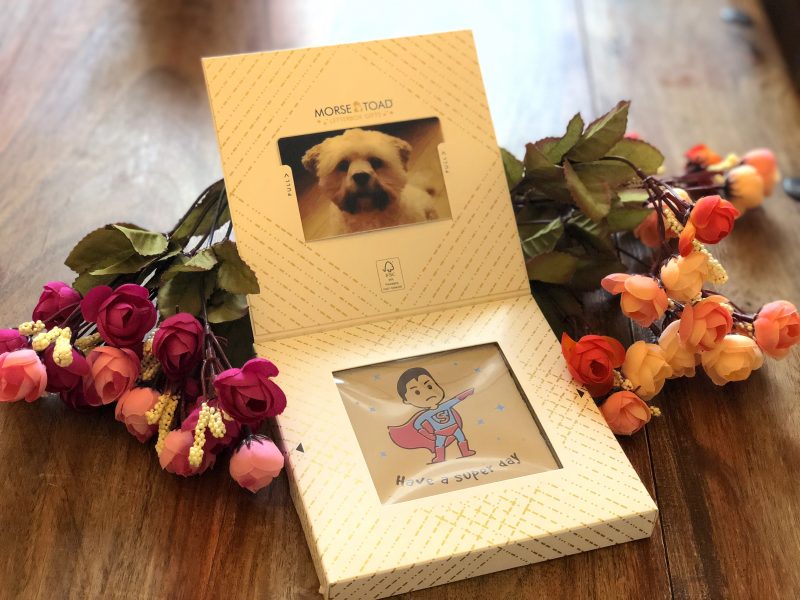 They’ve combined their two favourite things, chocolate and comedy, to create Chocolate Puns In The Post.

At £6.95 including shipping, we think that their puns will be an accessible gift for everyone. Customers can choose to add their own photo and printed message to the box to make it personal. At the moment they have 5 puns, but soon they will be releasing more.

What I really love about Morse Toad, is the story behind them. Like many an idea, Morse Toad was born from a moment of phone smashing frustration. A few years back, Mr Toad spent 4 years living overseas in Africa and Australia. Like many people in the same position, he had that nagging feeling that he was missing out on things back home. Whether it was a wedding, someone having a baby or just wanting to say happy birthday. He felt disconnected.

It is those moments when you want to show how gutted you are not to be there in person giving them a high-five and a bear hug. Somehow a text or an email will never successfully convey how you really feel. Mr Toad’s solution was to send them a metaphorical bear hug. Something that would really stand out. But he grew increasingly frustrated with the lack of options beyond flowers. The crunch point came on a bus when he was attempting to buy flowers from his phone. Cue a mini-meltdown that resulted in him banging his phone on the seat in front, at which point it fell to the floor and he experienced that universally recognised mishap of watching his screen disintegrate.

It was time for him to come up with a better messaging service. This service would offer humour and personality. It would address more than one sense. It would be quick and simple to use. Most of all, it would bring people closer together and make them happy, all via that wonderful form of communication, the post box. And so began. Morse Toad’s Marvellous Messaging Service.

You can order your own chocolate pun here and if you’re feeling lucky, why not enter their competition where you could win £100 and 25 free boxes!